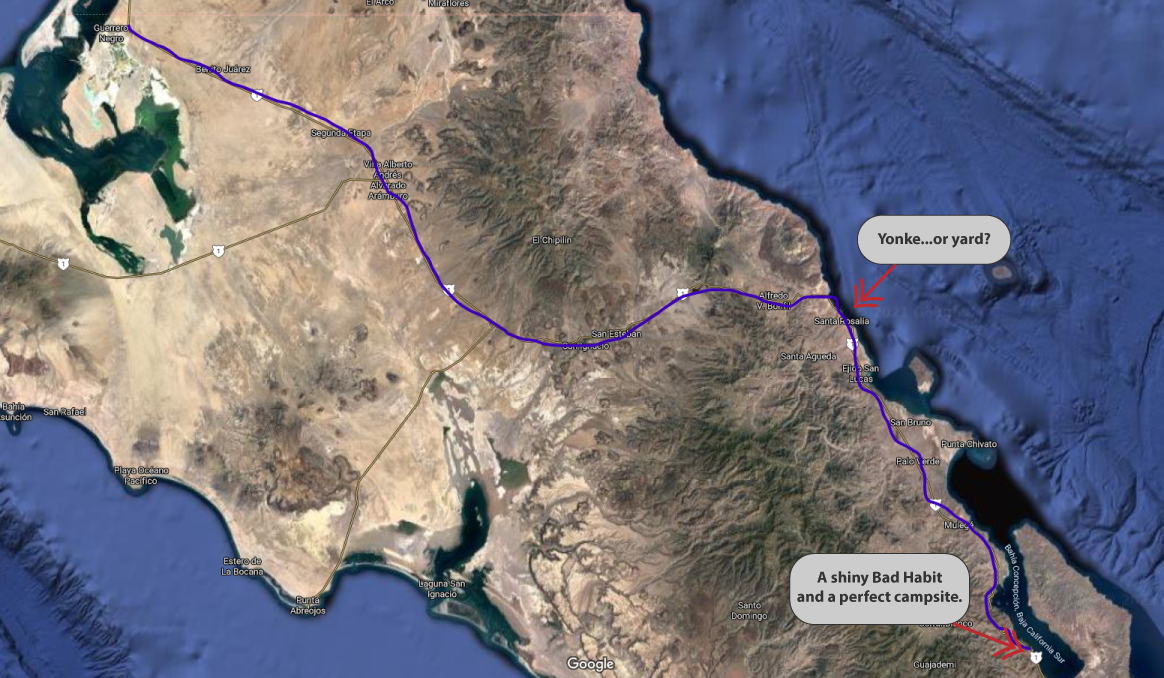 We started the day with showers. One for me, one for Jon, and one for our fridge and most of the things in it. We did a nice tidying of the truck, checked out of the hotel, and went in search of coffee.

After coffee & breakfast in a very Pacific NW style coffee shop, we took off, heading southeast again towards Vizcaino and beyond. Team Malos Habitos (JR and Judy) stuck around to join the lineup of trucks waiting for a car wash to get the mud frosting off, planning to catch up later.

We passed through Vizcaino (taking the speed bumps reeeeeeally slowly) and on towards San Ignacio. This is a little oasis town in the middle of the desert, home to a beautiful 18th century cathedral and a lovely town square. We were a bit nervous because the previous day’s blowup with the authorities happened in this town. However, we passed through the military checkpoint and got into town just fine. Spent some time checking out the cathedral and drove around the little town a bit, then gassed up and continued towards the coastline of the Sea of Cortez.

As we drove, we activated “Old Truck Owner’s Brainstorming Mode” – wherein those of us who lovingly nurture our ancient 4x4s dig deep in our brains to think up creative solutions to the myriad of challenges presented by our aging buddies. Luckily, the truck was running fine on the pavement. We had to take it pretty slow, but we were grateful that we could keep moving without too much difficulty. Ultimately we decided the best option was to find another spring – not exactly a walk in the park, because the spring is particular to the ’95 Montero. But there is one thing that Mexico has plenty of…dead cars sitting around in lots. And so, we learned a new Spanish word – YONKE (junkyard).

The first town actually on the coast was the busy industrial Santa Rosalia. Still holding out hope for a new spring in a parts store, we stopped at one and asked. The man who worked there spoke flawless English and basically confirmed what we suspected – we were highly unlikely to find a new spring anywhere. BUT…there was a big ole yonke just south of town. He gave us directions and we set off.

We got to the approximate location the parts store employee described and we did see a lot of old junky cars, kind of spread out between several buildings. It was difficult to see all the models there, so we edged in a little closer to the fence and driveways, kind of driving around the buildings and peering into the group of dead soldiers looking for a Montero. We didn’t see any people, but we did see a lot of things that looked pretty domestic. Were we at someone’s house? Um, probably better back out and carry on before we find ourselves in trouble…

We drove on and in about 5 minutes discovered the yonke we were searching for. Sorry, random homeowner with a whole lot of junked out vehicles in your yard! We pulled into the yonke and found a teenager, who went in search of someone to help us. A really nice young man emerged, and I used my somewhat less-than-totally-fluent Spanish to explain what we needed. He perked up and said they indeed had a Montero and asked us to follow him. We trailed along behind him, trying hard not to get too excited.

We walked and walked and walked. Hundreds of partially dismantled cars and trucks of all kinds in rows and rows but onward he went. It was impressive how well he knew the lot. Finally, he stopped. Behold! Before us was a very well preserved 1990-something Montero….Sport. Which happens to have…. leaf springs. Sigh…

We carried on. Our eyes were filled with beautiful views of the ocean and mountains, and we drove along scanning the roadside and towns for any sign of accessible dead cars. Mexico Yonke Tour 2021 was on! Our destination for the night was the official campsite from the previous night, a beach spot just north of Loreto. One or two more Montero-free yonke stops along the way, and then we stopped in Mulege, which is a really cute town with a good number of American ex-pats in residence. As with everyone else, most of the businesses were closed due to Covid, but we found the Mulege brewery where we were (safely) served a nice beer and a snack before carrying on down the coast.

As the sun began to dip to the west, we found the beach spot, and it was fantastic! Warm water, a nice little cove, 5 or 6 other teams from the rally, and after a stunningly long experience at the truck wash, Judy and JR caught up to us. We set up camp under a beautiful sunset and toasted the lovely place before turning in for the night.