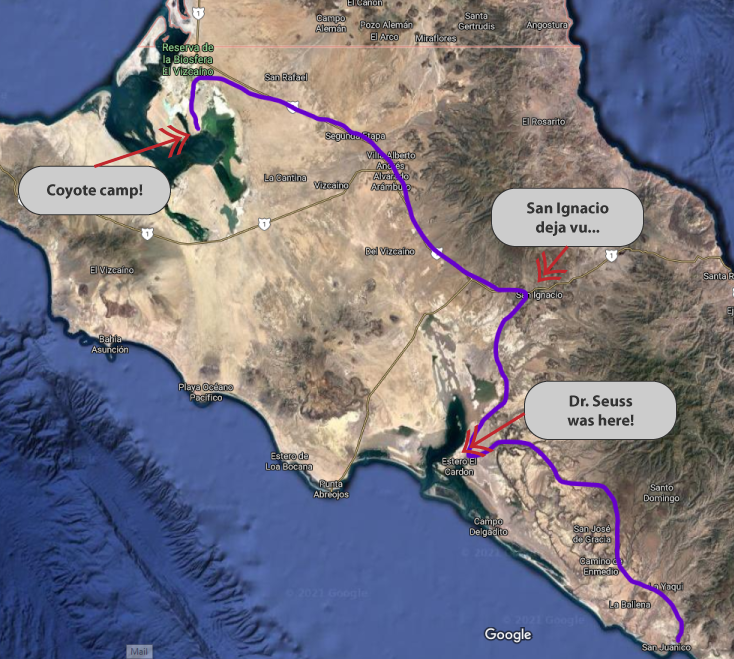 We woke up to a lovely sunrise. We made a quick breakfast, packed up camp, and drove up to the tiny village of San Juanico. There was a small restaurant (whose parking lot was filled with trucks we recognized) and a few little winding streets with nice “get-away-from-it-all” houses. It was up on a cliff and had a beautiful view back into the bay and the beach where we camped.

We had a lot of miles to cover today (again) so we skedaddled pretty quickly. Today our route took us on a dirt road until well into the afternoon, but it was a wide, graded road so basically a highway, by Baja standards. As we made our way northward, we moved into less sandy desert and more mountainous desert with scrubby green trees and lots of hills and valleys. The landscape was breathtaking.

We came out of the hills toward Laguna San Ignacio, which is an ocean inlet that slowly evolves into vast salt flats. The road took us right by some really unusual orange crusty ponds and Dr. Seuss-like salty piles of rocks. The ground seemed like hardened sand, but it was deceptively easy to sink right in. We steered clear of any major rescue situations and carried on.

Lunchtime found us back in the lovely square by the cathedral in the oasis town of San Ignacio, the only town we officially visited twice. After filling up on some delicious tacos and tamales, we got back on the actual highway to head back to Guerrero Negro. Remember that place? Way back on Day Three when the rally imploded, and we didn’t know what was coming next. Seemed like months ago…

Our destination was an actual established campground in a place called Laguna Ojo de Liebre, or Jackrabbit’s Eye Lake (another ocean inlet turning to salt flats). As we neared Guerrero Negro, we turned off the pavement to follow dirt tracks running in between massive salt fields. This area is the biggest salt mine in the world, run by a single company founded in 1957. We had to pass through a security gate and eventually we arrived at the campground just as the sun went down.

Each campsite had a little palapa and its own porta potty, something fairly unusual for Baja campgrounds. Assuming we had to pay a fee for the site we went back to the campground entrance where there was a building that looked like a visitor center. We walked around the back and discovered a lovely little restaurant and a few members of our group enjoying margaritas and dinner. We couldn’t say no to a margarita and swapping stories about our travels so far! Two of the other people there were the only two people in the rally on motorcycles, so it was really cool to hear about the trip so far from their perspective. It was a super fun night, and we didn’t even expect it!

We paid the camp fee and returned to the campsite where JR and Judy had crammed their tent inside the little palapa as it was very windy. We made a small fire and ended the evening listening to the coyotes that were surrounding the campsites (very close!), waiting to clean up any errant food scraps or dine on our shoes if that’s all we left out…