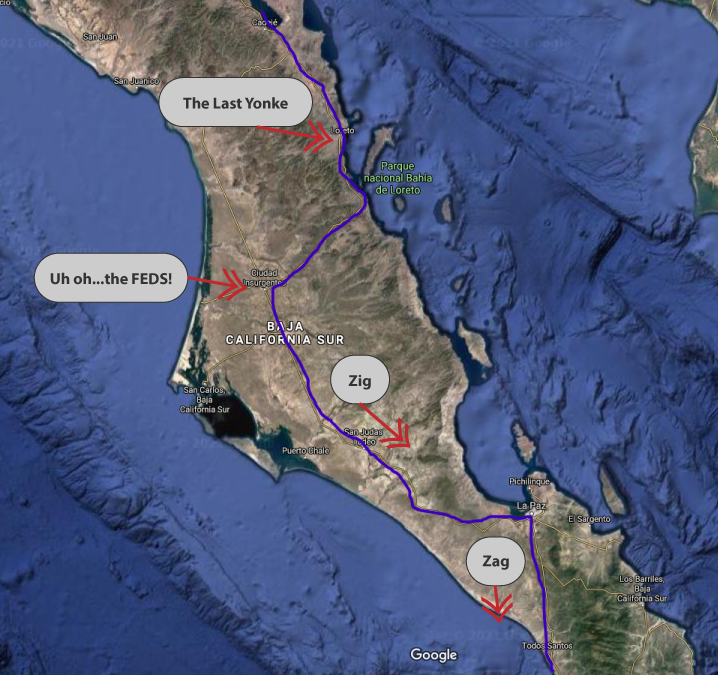 So, we’d heard the rumors. We weren’t the only truck that had, uh…problems. Some were far more dramatic than ours. But now that their owners had a few days to work up solutions, we started to realize two things. One, nobody was going to give up and go home. Nobody. And two, Mexican mechanics are problem-solvers. It doesn’t even matter what the problem is…they will solve it. So today was the day – we were going to find another Montero or find us a repair shop.

We reluctantly left the Best Camp Spot Ever and headed south towards Loreto. We had our eyes on a couple yonkes, but when we got to this beautiful up-and-coming tourist spot on the Gulf of California (aka Sea of Cortez) we were hungry and needed some street tacos, stat. And oh boy, were they good!

On the outskirts of Loreto, we ventured to yet another yonke. This one even had a website. It was very big, and we were very hopeful. But, alas, once again, no Montero. We were finally ready to throw in the yonke towel and find a repair shop. A friend who lives in Baja had told us about a shop in Ciudad Constitución which was a few hours in front of us, so we decided to head that way.

As you can see on the map, there is basically one big highway that covers Baja California from north to south. It zigzags back and forth from the Pacific side to the Sea of Cortez side and it’s really just a two-lane highway. Most of the rest of the roads are dirt. This system is the key to Baja’s magic. It’s just not easy to get around, period. You can do it, but you have to invest in the trip. It takes a really long time to get from one place to the next and that right there is the spirit of Baja. Why be in a hurry? It’s all about being where you are when you are there.

After Loreto, the highway turns inland again and heads back to the west side. Once you cross the mountains, you end up in a large farming area. We arrived at a town called Ciudad Insurgentes and as we turned south, we saw a federal officer pulled over on the side of the highway waving us over. Many people in the rally group had been stopped in various places but this was a first for us. We felt a little scared that we might get thrown out of Baja Sur (or worse), but the officer was very professional and positive. He asked if we were competing in a race (no) and if we knew that off-road races were not allowed (yes). We told him where we were going and that we were traveling with just our two vehicles (truth). He thanked us for our understanding and motioned for us to continue. Phew!

About an hour later we came upon Ciudad Constitución. And a lovely huge yonke right on the outskirts! We forgot our decision to abandon yonkes and pulled over immediately. And were greeted with silence and a locked gate. Oh, so close! This one even had a sign painted on the wall that said Mitsubishi! It was like…a sign! (Get it?) We grudgingly got back in the truck and carried on. Our friend had instructed us to go to the AutoZone and ask for directions to Abraham. Mexico is so great! We did exactly that, but the AutoZone employee we encountered didn’t actually know Abraham…but he did know a really good suspension shop just up ahead and suggested we go there when siesta was over. (Ohhhhh…siesta. That’s why the yonke was closed….)

So, let’s cut to the chase. This place was nothing short of magic. We pulled in, explained our problem, they showed us where to park, shooed us off (actually they got a bunch of lawn chairs for us to sit in), and inside of about 15 minutes they had the tire off, the broken spring removed, and a guy had jumped in a car and taken off with it, presumably to go find a replacement. 20 minutes later he was back. They jammed the new spring back in, asked Jon to drive it, he reported it was a little high and a little loose, so they pulled it back out, shaved off a ring or two, added some material to stabilize it, sent him on another test drive, used the extra rings to weld the broken spring back together as a replacement, and Jon returned reporting that it was driving just fine. Simply amazing! In the U.S. we would still be negotiating the time of the appointment when they could fit us in. And the price for this speedy service? $75 US. That’s it. (We gave them more!)

We were back in business! At this point we were a day behind the rally schedule. If things had been on track, we would have been spending tonight in Los Barriles with our friend who helped us find the repair shop, and then moving on to Todos Santos the next day for a pre-arranged hotel stay. Because of the delay, we decided to bypass Los Barriles (never fear, Mr. C., we’ll be back!) and spend the rest of the day into the evening heading straight for Todos Santos. We didn’t have a reservation for tonight, but we’d heard you can camp on the beach in front of the hotel (which is really south of Todos Santos in El Pescadero). Off we went, zigging back across the peninsula to La Paz, then zagging across once more towards El Pescadero.

We arrived around 9:30pm and started trying to find a way down to the beach. Blocked by either someone’s house and yard or fences and walls every time we thought we were close. Eventually we went to the hotel gate and asked the security guard if we could get out on the beach anywhere. He assured us it was fine to drive out there and camp and pointed us back in the direction from which we’d come.

We drove back and tried again but still no luck. Time to punt! We used Google maps to find visible dirt roads that led out to the beach south of town. Found our way onto a dark and deserted beach that just might have been a whole bunch of private lots, but we took our chances. Parked in front of a lot with nothing built on it, set up camp, made a quick dinner and had a nightcap listening to the waves of the Pacific before going to bed to listen for policia all night long.