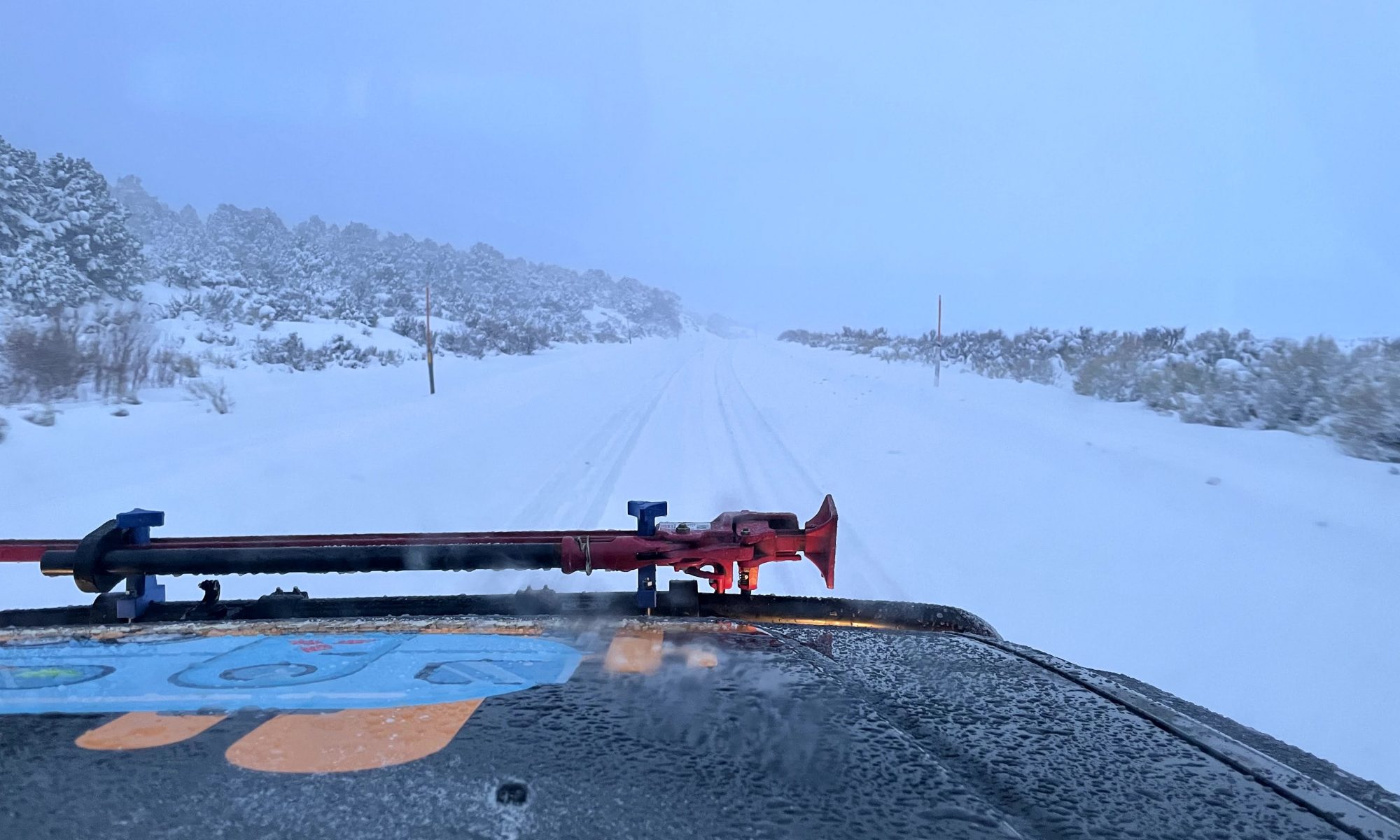 I heard there’s this crazy race thing next winter, wanna go? Yeah, we can take the Montero. What transmission? Oh, we’ll get that done, don’t worry….

One Garage, Two People, One Transmission

We really should have started earlier. Like months earlier. But no, there we were, barely two months before the rally was to start with a To-Do list about three months long, and we decide to tackle replacing a transmission in a 1995 Mitsubishi Montero. All by our twosome. Not only that, but we also had to install a second battery and all the wiring that goes with that, fix about 610 minor things, and build out the back end to carry all our stuff across thousands of miles to support ourselves for two weeks.

Cut to the chase – it’s cold in the winter in Washington and the garage is not insulated. It does, however, have a nice wood burning stove. Thus begins the morning competition – who’s getting out of bed first to light the fire? That was our first teamwork success…we managed to divide that chore pretty evenly. One person built a fire and made the coffee, the other one tackled breakfast. By the time we were ready the garage was no longer sub-zero.

Over the course of about a month, we physically battled a 300lb transmission into submission. A combination of a 4-post lift, a rolling jack, a lift jack, two bottle jacks, various sizes of wood blocks, muscles, and sheer determination helped us get that thing into place. 5 times, actually, because 4 times we got a bolt in and something wasn’t right. Once that even included the fun fact of having sandwiched a major wiring harness between the transmission and the engine. Sigh….

Never Let Your Guard Down

Finally, several weeks in, we had that thing bolted onto the engine. Ready to test drive. We cautiously lowered it, cautiously started it, cautiously backed it off the lift, and cautiously drove it around the neighborhood. Success!! It shifted! And drove!! Mexico here we come!

Back to the garage we go, reversing onto the lift this time. We raise it up a bit and tackle various projects, high-fiving our success every few minutes. At one point I asked Jon to raise it up a couple more notches. Up it goes, and goes, when suddenly a colossal EXPLOSION! Glass flies everywhere! We just froze, staring at each other, completely stunned. The back door of the Monty was open when we started lifting. We didn’t notice it catch under the frame of a small loft in the garage…until the pressure burst the entire rear window and bent the door.

Talk about a buzzkill.

Long story short, we got real lucky. Within a week or so, Jon found the same color and year Montero in a junkyard, and we were able to get another door and replace it all without much trouble. Phew!

During the final few weeks, we put our noses to the grindstone and knocked out the list efficiently. Within a week of departure, we had the truck all ready to go, list all knocked out, and still actually liked each other!

Except for when we have 2 days to get from Washington state to the Mexico border. Team Malos Habitos, our good friends Judy and JR, wisely left a day earlier than us. True to form, we didn’t need no stinkin’ extra time. Our plan was to power southward through Washington and Oregon and get to northern California before we crash for the night.

We’d heard rumors of snow but like many, we thought yeah right, it’s California. Well, the biggest storm in over 100 years hit. That very day. We got as far as central Oregon before we encountered the first blizzard conditions. We tried as hard as we could, but only got to southern Oregon the first night. All highways south were literally closed, we couldn’t have gone any further even if we were driving a snowplow.

We woke up the next morning with 36 hours to make a 24-hour drive. Daunting. Teams from all over the northern states were getting waylaid by the weather, we were definitely not alone in this drama. We ended up routing ourselves all the way into the state of Nevada to try to get around it. While we avoided most of the closed roads (not counting the one we pushed our way down in the darkness before being turned around by the highway patrol), we went hundreds of miles out of our way, and encountered blizzard after blizzard. There was one 20-mile leg somewhere north of San Bernardino that we drove through in the wee hours  that was like driving with your eyes closed. Neither of us had ever seen anything like it.

We just kept going, and going, and going. As the sun came up, the snow was gone (finally!) and we approached the border outside Tecate, where the start line hotel was. Our joy and relief (and exhaustion) were immeasurable at this point. We checked into the hotel around 7am, shared a beer, and crashed into a deep sleep. We had made it!