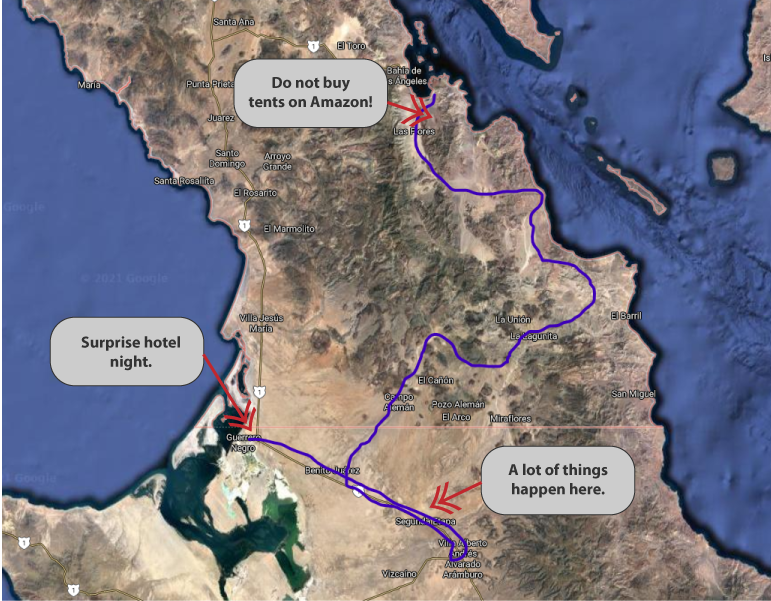 The sun came up on our lovely campsite and we prepared for another day of moving southward. As we packed up, we tuned in to the daily briefing, held over CB for proper social distancing. Around 7:10 as the briefing was ending, someone asked if there was an official start time. We’d always known there was a time limit each day (usually 8 hours) but our understanding was that was just 8 hours after you went across the start line coordinates. The organizer confirmed this. So we carried on packing up, which was taking on a certain established process. The last phase of this process was packing up the potty tent. We bought a light, cheap, self-popping tent off Amazon that was meant to efficiently fold back up into a circle that fit into a zipper sleeve that keeps it from popping back up. The previous morning, we nervously grabbed one end each and kinda walked towards each other and executed some savvy “twist up from the bottom” move and the beast just slid right into itself perfectly. We had congratulated ourselves mightily, but we really should have taken that moment to rehash what we’d done. Because today….it was not going quite as well. And then, suddenly the organizer gets back on the radio and says “oops, sorry, what I meant was you have 30 minutes after the briefing to cross the start line.” This was now in about 13 minutes, and we didn’t even yet know where the start line was. Cue the panic!

We…just…can’t…get…this…stupid…tent, forget it! We partially fold the monstrous object and shove it between the seats and the storage unit and hope it doesn’t pop back open and decapitate us as we race towards the start coordinates.

We crossed the spot in the nick of time and then pulled over to start again on the tent. You know how they say the definition of insanity is doing the same thing over and over and expecting a different result? That theory applied to this process. 45 minutes later, that godforsaken piece of evil fabric is again haphazardly folded in half and jammed behind the seats and we take off, hoping for the best (and maybe laughing at ourselves a lot too).

The morning passes nicely, more beautiful landscape, more amazing Sea of Cortez views, more whoops, more checkpoints. At one point we made our way into a tiny little enclave called San Rafael. It was just a gathering of houses up above a lovely beach. Our task was to report the species of an animal skeleton at Pancho’s house.

Unsurprisingly, there was no sign indicating which was Pancho’s house. After spending time overthinking it all, we remembered we’d brought a bag of toys to hand out to kids and hey look! There are some kids over there! And I speak Spanish! We meandered over, handed out toys to joyful little grimy hands, and they pointed across the way to a funky little house with two very amused old ladies sitting out front…and the whale skeleton that bordered the edge of the yard.

Around the middle of the day, we broke loose of the sandy roads and got back on the highway. We were right on the border between the two states of Baja – Baja California and Baja California Sur. Our plan was to stay on the highway and skip a whole chunk of the points along the way so we could make it to the campsite while it was still light, as it was right on a beach. But alas…plans DO change.

As we pulled into a town called Vizcaino, we went over a speed bump a little too fast. The rear end slid off the bump with a loud CLANG! We pulled over right away to investigate but saw nothing obvious. As we continued into the town, we see quite a few other rally vehicles in various places, including the AutoZone. Clearly, we weren’t the only injured soldiers. We pull into the AutoZone to have a better look. At almost the exact same moment in time, two things happen. 1) We discover we’ve completely snapped a rear coil spring, and 2) Our compadres at the AutoZone inform us that a huge group of ralliers ahead of us have been stopped by the Baja California Sur (“B.C.S.”) authorities and told we were not allowed in the state. Their Covid policies had just been escalated and no off-road races were allowed. Nobody knew anything beyond that, so we collectively decided to stay in this town until we heard more. We had a coil spring to find as well…

After a nice beer and ceviche lunch, we returned to the AutoZone and by then had been conversing with other group members. The general consensus was that everyone was going back to Guerrero Negro, about an hour northwest and right on the border between the states. Our spring problem remained unsolved, but luckily Monty was running fine and able to drive pavement with no real issue. After watching a whole bunch of our fellow travelers be escorted northward by police, we joined the exodus to Guerrero Negro to get a hotel room and await further instructions from the rally staff.

By the end of the evening, we’d been fed in the hotel restaurant (who was clearly not expecting so many dirty off-roaders all at once), had a great margarita, and learned that the B.C.S. government would not allow our event to continue. However, they did agree to the alternative of allowing us to travel as tourists (meaning we had to take those beautiful Baja XL stickers off our trucks) and continue throughout the state. The organizers officially cancelled the B.C.S. leg but sent us the GPS tracks for that entire section, so we decided to carry on with Judy and JR and do what we could do (while also trying to find a solution to the coil spring issue). The plan was to reunite with the other competitors just north of the border in another 5 days and resume the last bit of the competition in Baja north.